Photos taken from the GOL B 737 aircraft accident in Brazil

The two photos attached above were apparently taken by one of the passengers in the B737, after the collision and before the aircraft crashed. The photos were retrieved from the camera’s memory stick. You will never get to see photos like this. In the first photo there is a gaping hole in the fuselage through which you can see the tailplane and vertical fin of the aircraft. In the second photo one of the passengers is being sucked out of the gaping hole.
Photos taken inside the plane. 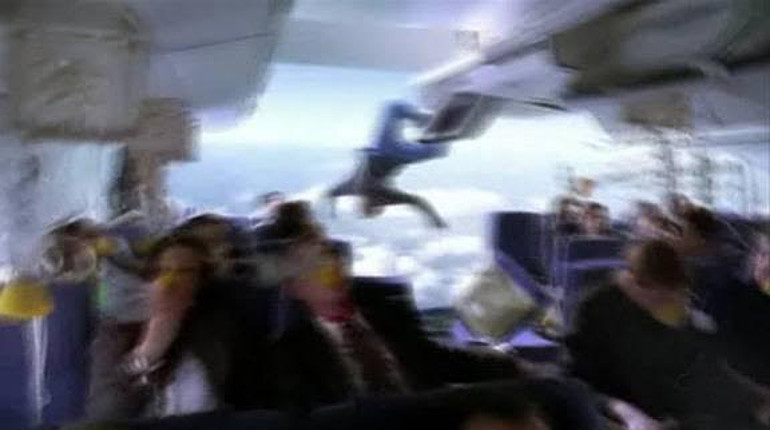 These photos were found in a digital Casio Z750, amidst the remains in Serra do Cachimbo. Although the camera was destroyed, the Memory Stick was recovered. Investigating the serial number of the camera the owner could be identified, as Paulo G. Muller, an actor of a theat re for children known in the outskirts of Porto Alegre It can be imagined that he was standing during the impact with the Embraer Legacy, and during the turbulence he managed to take these photos, s econds after the tail loss the aircraft plunged, so the camera was found near the cockpit. the structural stress probably ripped the engines away, diminishing the falling speed, protecting the electronic equipment but not, unfortunately, the victims. Paulo Muller leaves behind two daughters, Bruna and Beatriz, from a previous relationship.

Hoax alert! The E-mail above is a HOAX. The story is fake. The described airplane crash really happened, but the photos are actually from an air crash sequence featured in the television series: Lost!

If you’ve received this by e-mail than inform the sender it is a HOAX. Do NOT forward this fake message! Delete it.

Outline: Message circulating via social media and SMS warns you not to open a video called the “Dance of the Hillary” because it is a...

Outline: Meme circulating via social media claims that October 2016 will have 5 Mondays, 5 Saturdays, and 5 Sundays, an event that only...

Adding a headphone socket to your iPhone 7

Outline: Email with an old photograph of a leader addressing a crowd claims that a speech on the assimilation of immigrants included in...

$35,5M from the Federal Ministry of Agriculture and Natural Resources

Richard Branson on how to identify and avoid scams